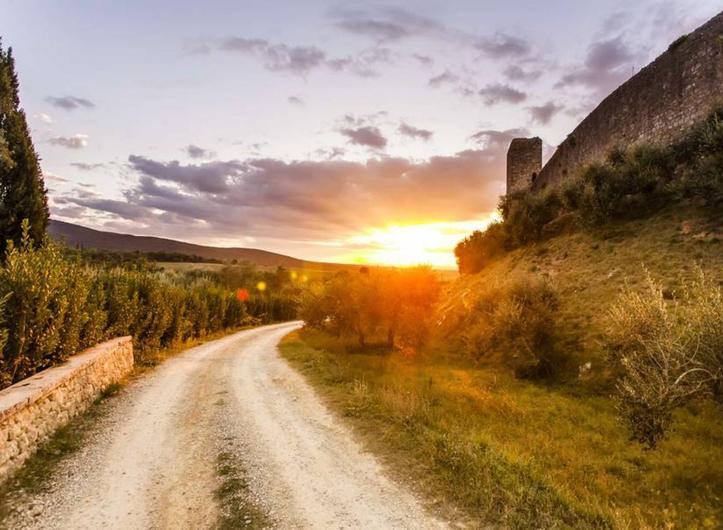 The Castle of Monteriggioni was built by the Sienese, by order of the podestà Guelfo da Porcari, in a period between 1214 and 1219. The land, purchased by the Sienese Republic, was the site of an ancient Lombard farm (the name Montis Regis probably indicated a royal property or one that enjoyed tax exemptions from the crown).

The construction of the castle by the Republic of Siena had mainly a defensive purpose, as the village was built on Mount Ala in a position of dominance and surveillance of the Francigena, to control the valleys of Elsa and Staggia in the direction of Florence, historical rival of Siena.

The building, practically ex novo, of a castle represented a novelty in the expansionist politics of Siena: previously, in fact, the city had acquired already existing castles, such as that of Quercegrossa.

The circular layout of the walls was obtained simply by following the natural course of the hill.

There is no agreement among historians about the possible presence of the drawbridge. Certain is instead the presence of the portcullis, or thick wooden doors covered with iron that were operated by pulleys. Even today the two doors show the signs of the hinges and the holes caused by the closing rods. On the west door, one can also see the signs of the rivellino, another defensive structure of rectangular shape located in front of the door and also equipped with a second door.

The Castle of Monteriggioni was also surrounded by the so-called charcoal pits, or ditches full of coal and wood that was set on fire to repel assaults. It is obvious that moats full of water, as seen in many medieval reconstructions, on top of a hill were impossible.